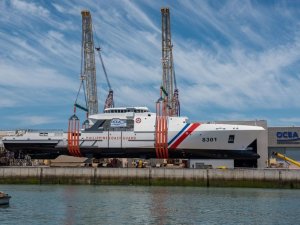 The preliminary sea trials of the vessel, based on OCEA’s OPV 270 design, demonstrated the general good behaviour of the vessel, said the shipyard in a statement.

“The OPV 270 has shown her excellent sea keeping performances, an essential capability in the perspective of the future helicopter or RIHB operations. The crew could experience great comfort onboard the vessel and the very low noise level in the wheelhouse. Indeed OCEA pays specific attention to the comfort onboard, in order to increase the operational readiness of the crew and complements. The good manoeuvrability of the vessel allowed to push further the trials. The contractual maximum speed was even exceeded by one and a half knots!”

The very versatile OCEA OPV 270 is designed to carry out all maritime security and safety missions under the responsibility of the Coast Guard in the waters of the Philippine archipelago. It can conduct Exclusive Economic Zone (EEZ) surveillance operations, smuggling and illegal immigration control, anti-piracy and anti-trafficking missions, search & rescue, natural resources and blue economy protection, anti-pollution activities, diving operations and sovereignty missions.

The vessel is named after Gabriela Silang, a revolutionary leader during the Philippine struggle for independence from Spain. Once commissioned, it will be the first OPV and the largest and most modern vessel of the Philippine Coast Guard.

In January 2018, it was announced that the Philippine Coast Guard selected OCEA for the supply of 5 patrol vessels in civil standards, along with the associated logistics and support services. The deal included one 84 m OCEA OPV 270 offshore patrol vessel, four 24 m OCEA FPB 72 MKII fast patrol boats, crew and maintenance teams training and the maintenance of the vessels in operational conditions.

BRP Gabriela Silang has an overall length of 84.00 m, a maximum speed of 20 knots, a range of 8000 nm at 12 knots and an endurance of 5 weeks. The vessel has a crew complement of 40 and can accommodate 26 personnel along with 35 civilian passengers.

This news is a total 379 time has been read
Tags: Philippine Coast Guard, OPV BRP Gabriela Silang, based on OCEA’s OPV 270 design