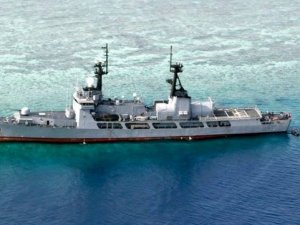 The Philippine Navy has refloated the frigate Gregorio del Pilar, which went aground on a disputed shoal in the South China Sea on August 29.

Commercial and government salvage vessels pulled the del Pilar off the reef at midnight on Monday. She will undergo an inspection and will then be towed to Subic, according to Armed Forces of the Philippines spokesman Col. Noel Detoyato.

An initial dive inspection found no hull damage, but the starboard propeller is no longer attached to its driveshaft. No injuries to the crew of the del Pilar were reported.

All images courtesy Armed Forces of the Philippines

The reef, known as Half Moon Shoal or Hasa Hasa, is on the edge of the Spratly Islands, where China, the Philippines, Vietnam, Taiwan and others have overlapping claims. China operates seven man-made, militarized islands in the Spratly chain.

China opposes the Philippine presence on Second Thomas Shoal, about 55 nm to the northwest of Half Moon Shoal, where a small company of sailors man an intentionally-grounded wreck. The BRP Sierra Madre, a WWII-era U.S. Navy tank landing ship, was run aground at Second Thomas Shoal in 1999 by the Philippine Navy. Its rusting hull has provided shelter for a Philippine outpost for nearly 20 years, despite a Chinese blockade.

Manila contacted the Chinese government after the del Pilar ran aground last week in order to head off any misunderstanding about the Philippines' intentions. China offered its assistance in the salvage effort, but officials in Manila opted to complete the refloat attempt with their own assets.

Prof. Ryan Martinson, a specialist in Chinese maritime policy at the U.S. Naval War College, noted that the China Coast Guard cutter 3402 was on scene at Half Moon Shoal during the salvage effort. Separately, Chinese Foreign Ministry spokesperson Hua Chunying said that the Chinese SAR vessel Nanhaijiu 115 was stationed nearby and ready to assist.

This news is a total 723 time has been read
Tags: Philippine Navy Refloats Grounded Frigate