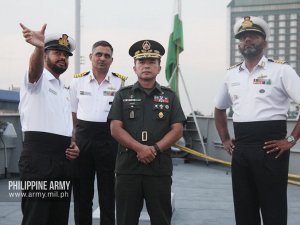 In a major development that could change the power dynamics in Southeast Asia, the Philippines Army has indicated that it is going ahead with the purchase of the BrahMos anti-ship cruise missile, an India-Russia joint.

In a major development that could change the power dynamics in Southeast Asia, the Philippines Army has indicated that it is going ahead with the purchase of the BrahMos anti-ship cruise missile, an India-Russia joint development that is considered the world’s deadliest missile and can hit the target at around Mach 3 speed.

Indian and the Philippines officials are reportedly negotiating the price terms of a potential sale of the BrahMos supersonic cruise missile to the Philippines.

Indeed, an unidentified source was quoted by the publication as saying: “As far as the Philippines Army is concerned, the consensus on the BrahMos system is a done deal. Now, it’s all about the price negotiations and we hope the deal will be finalised next year.

“Various options are examined, whether it should be internal funding or a preferential loan and whether there will be some preferential terms offered for the sale. The cost will determine how many systems are bought.”

In line with the Armed Forces of the Philippines’ (AFP) Integrated Missile Defense System program, the PA aims to advance its coordination with the Philippine Navy and Air Force in the safeguarding the country from external threats.

At arms expo in Manila, the Philippines army displayed a mock-up of the BrahMos land-based anti-ship missile, currently operational with Indian armed forces. The full-sized model of the missile was mounted on a modified mobile firing unit using the Philippine Army's existing Kia KM500 tractor head and trailer.

A few weeks ago, the Philippines Army spokesperson Ramon Zagala said that during the goodwill visit of two Indian warships – the INS Sahyadri guided missile stealth frigate and the Kiltan anti-submarine warfare corvette – Philippines Army officials were briefed about the Brahmos missile.

Earlier this month, the Army activated its first land-based Missile System Battery under the Army Artillery Regiment. The unit is currently working on its training programs before acquiring its future equipment.

Once acquired, the BrahMos missile - the fastest missile manufactured by a joint venture between India’s Defence Research and Development Organisation and Russia’s NPO Mashinostroyenia – will surely augment the firepower of troops especially in a large-scale armed confrontation.