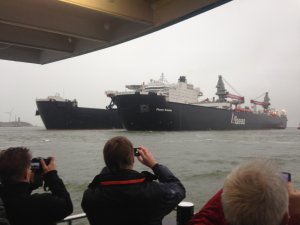 According to Allseas, the name of the vessel reflects what she stands for: a new technological step in platform installation and decommissioning.

“It also fits the 30-year tradition of Allseas to pioneer and surpass technical boundaries, as was done over the years introducing pipelay on dynamic positioning and laying pipelines in ever deeper waters. This vessel encompasses all innovations that have been developed by Allseas over the last 30 years,” the company said in an emailed statement.

Allseas decided to change the name of its crane vessel Pieter Schelte after vehement opposition from the maritime unions and most recently Jewish groups from the Netherlands and Belgium.

The Panamanian flag of convenience vessel was named in honour of the Allseas Group’s owner’s father, who was a Nazi Waffen-SS officer, jailed for war crimes.

Just last week, the company told World Maritime News that it had no intention to change the name.

However, as the opposition grew fiercer, resulting even in the involvement of the UK Government, the company succumbed to the public pressure and decided to change its mind.

This news is a total 2951 time has been read
Tags: becomes, europe, News by topic, offshore, Pieter Schelte, Pioneering Spirit, The Netherlands, vessels