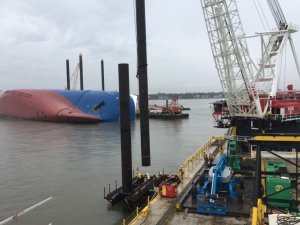 Weeks Marine has completed the pile driving operation in the salvage of the Golden Ray vehicle carrier in Georgia’s St. Simons Sound.

In total, 80 piles had to be driven into the seabed using Weeks’ derrick crane barges. The piles will hold the environmental protection barrier being built around the wreck, The EPB will include a large floating containment barrier to help contain surface pollutants, as well as large netting for debris in the water.

The pile-driving operation is considered the first phase in the construction of the EPB.

The 656-foot M/V Golden Ray capsized and became grounded as it departed the Port of Brunswick with over 4,000 vehicles back in September 2019. The Unified Command overseeing the salvage has opted for a salvage plan that involves cutting the ship into sections and removing each using the twin-gantry crane heavy lift catamaran VB-10,000.

The salvage operation is expected to take at least a year, putting it well into and possibly beyond the 2020 hurricane season.

Meanwhile, crews T&T Salvage has been working on installing lifting lugs that will be used the connection point between the rigging of the VB-10,000 heavy lift barge and each section of the Golden Ray. In total, 16 lugs are scheduled to be installed with two lugs installed on each of the eight sections once the ship is cut up.

This news is a total 775 time has been read
Tags: salvage, Golden Ray