PIL’s Kota Bahagia hit by fire in Port of Napier 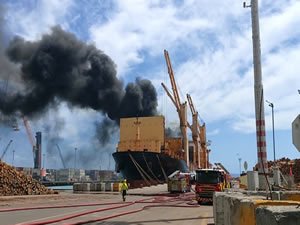 A fire broke out on board a cargo vessel identified as Kota Bahagia, in the Port of Napier today, December 18, 2020.

The fire originated in one of the holds of the Singapore-registered cargo ship owned by Pacific International Lines (PIL) while it was berthed at the wharf.

The 25,000 dwt multi-purpose ship was built in 2011 by Dalian Shipbuilding Industry.

It has been reported that all crew members have been accounted for.

The New Zealand’s Transport Accident Investigation Commission has opened an inquiry into the causes and circumstances of the fire.

Harald Hendel, the Chief Investigator of Accidents, has appointed a team of two investigators. They will travel to Napier tomorrow, 19 December, the commission said.

Based on the update from Fire and Emergency New Zealand, the fire has been put under control as fire crews continue to cool down the ship.

“Their initial work will include interviewing witnesses and inspecting affected parts and cargo of the ship when safe to do so.”

The commission opens an inquiry when it believes the circumstances of an accident or incident have – or are likely to have – significant implications for transport safety, or when the inquiry may allow the commission to make findings or recommendations to improve transport safety.

This news is a total 4512 time has been read
Tags: Kota Bahagia , Napier Port , PIL