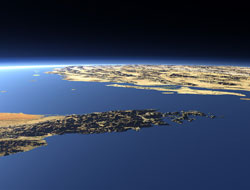 The United Arab Emirates (UAE) have invested massively to build a pipeline to circumvent the strategic Strait of Hormuz.

The United Arab Emirates (UAE) have invested massively to build a pipeline to circumvent the strategic Strait of Hormuz.

Iran has long posed a potential threat to the strategic Strait of Hormuz, through which 40% of the world"s oil passes. The United Arab Emirates (UAE) have invested massively to build a pipeline to circumvent the busy shipping route. A new industrial port and a 400km pipeline are under construction at Fujairah in the United Arab Emirates (UAE), in a desperate bid to bypass the Strait of Hormuz and the ever looming threat of an Iranian blockade.

Should Iran ever seek to impose a blockade of the strait, as it has repeatedly threatened to do in the past, it would jeopardize the millions of barrels that every month pass through the busy stretch of sea linking the Persian Gulf and the Gulf of Oman.

Tucked in between Iran and Oman, the Strait of Hormuz is the sole sea passage through to the Persian Gulf and an unavoidable route for 40% of the world's oil output. At its narrowest, the stretch of water measures just 55km in width, which makes it vulnerable to attacks from the shores. The strait's shallow waters also make it difficult for large ships to manoeuvre.

The project should be completed by 2010. It will be used to export roughly two thirds of the oil produced in Abu Dhabi, which alone accounts for 90% of the UAE"s oil output.

The pipeline will transport 1.5 billion barrels per day from the Habshan oil field, through a single pipe with a diameter of 122cm.

As well as the pipeline, a new oil port will be constructed at Fujairah, complete with marine loading platforms. The port could be used as a hub to export oil from other Gulf States, should they build further pipelines to reach it.

Saudi Arabia has long sought to bypass the Strait of Hormuz, and a pipeline carrying oil to the Red Sea was strengthened in 1990.

According to Francis Perrin, editor of the journal ?Arab Oil and Gas ", these measures have ?reduced the potential nuisance of Iranian threats?.

Concerns that Iran could shut off the strait became a reality in 1984 during the Iran-Iraq War.

Since then tensions have never been far from the boil. Following an incident involving the US and Iranian navies in January of last year, Iran set up a new naval base to the east of the strategic strait in October.

According to Francis Perrin, the new pipeline goes only so far in protecting the security of Gulf oil, as the strait will still be used to transport a huge amount of the region"s valuable commodity. The straits remain, he says, ?a key passage for oil tankers?.

Given the geography of the strait, adds Perrin, it would be easy for Iran to impose a blockade: ?We know that the Iranian navy is there and that it is powerful; it would not be difficult to mine the whole area. It is a threat we cannot rule out.?