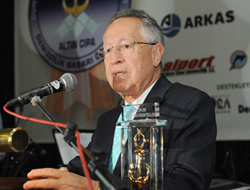 SHIPPING organisations from all sides of the industry today issued what they described as ?a crisis call? to the International Maritime Organization and the United Nations to take ?real and immediate action? to tackle piracy in Somalia.

Shipping unites in 'crisis call' to Mitropoulos for piracy action

SHIPPING organisations from all sides of the industry today issued what they described as ?a crisis call? to the International Maritime Organization and the United Nations to take ?real and immediate action? to tackle piracy in Somalia.

Meanwhile, pirates in the troubled African nation today underlined the seriousness of the situation by hijacking two smaller bulk carriers, one operated by Sinotrans and another managed by Greek interests.

The document calls on IMO secretary-general Efthimios Mitropoulos to use his organisation"s influence to ensure UN backing for increased use of naval force to protect the lives of seafarers and passengers, as well as ships and cargoes.

Warning that the situation appears to be spiralling out of control, the signatories urged more nations to commit naval vessels to the area and ?crucially, for them to engage effectively, actively and forcefully? against any act of piracy.

While falling short of explicitly endorsing armed force, the statement goes on to blast the lack of political will on the part of governments to give military forces clear rules of engagement, despite the mandate provided by United Nations Security Council resolution 1816, carried last June.

Moreover, with attacks now being mounted more than 200 nautical miles from the coast, the existing standard advice to keep at least this distance is rendered redundant.

Widespread redirection of ships via the Cape of Good Hope ? the main alternative east-west route ? would entail severe consequences for international trade, including increased prices for delivered goods.

?The shipping industry does not underestimate the bravery or good intentions of those manning warships in the region, but the current patrolling and hands-off approach is clearly making no difference.?

One British intelligence source said that most governments have a policy of ?look but don"t touch? on the Somalia question

?The way things are, governments don"t want to get involved until there is a clear mandate,? he said. ?There is a broad UN position, but they haven"t followed through on the detail.?

An International Maritime Organization representative confirmed that the UN agency has responded to statement signatories. ?We are certainly not apathetic to what is happening and we are very concerned. We have not left any stone unturned to do what we can to address the situation,? she said.

Mr Mitropoulos has already written to UN secretary-general Ban Ki-moon, requesting his support for an extension of the mandate contained in resolution 1816, which expires in December. ?IMO has been having a series of informal consultations with all stakeholders concerned, and these consultations are ongoing.?

The number of vessels being held in Somalia has risen by a further two to approximately 13, after the capture of 1977-built, 12,812 dwt Centauri and 1998-built, 27,383 dwt Great Creation in short succession.

The latest outrages mean that as many as 260 seafarers are being held hostage in Eyl, a former fishing outpost on the Somali coast.

Centauri, carrying a crew of 25 people thought to be all Fillipino, was heading for Mombasa after a call in Ethiopia.

Great Creation, again had a reported 25 seafarers on board, including 24 Chinese nationals and a Sri Lankan master. The Hong Kong-managed Sinotrans unit was en route ex-Tunisia to Pipavav in India, laden with chemical fertiliser.

The International Maritime Bureau"s piracy reporting centre in Kuala Lumpur confirmed that both ships have formally been reported as taken by pirates, but was unable to add further details.

Patrick Wong, a spokesman for the Hong Kong Marine Department, said a security signal was received at around 1400 hrs today, indicating that around seven to eight armed pirates had entered the boat, but that those on board were ?in safe condition?.