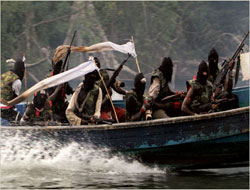 The Gulf of Aden and the east coast of Somalia rank as the top piracy hot spot, accounting for a third of all attacks on ships in the first nine months of 2008, the International Maritime Bureau (IMB) said on Thursday.

The Gulf of Aden and the east coast of Somalia rank as the top piracy hot spot, accounting for a third of all attacks on ships in the first nine months of 2008, the International Maritime Bureau (IMB) said on Thursday.

The attacks threatened trade passing through this vital route between Asia and Europe, the watchdog said, urging governments to take pre-emptive action against pirates.

"Piracy attacks off the coast of Somalia are unprecedented. It is clear that pirates in the Gulf of Aden believe that they can operate with impunity in attacking vessels," IMB Director Pottengal Mukundan said in a report released from its international reporting centre in Kuala Lumpur.

The watchdog said that a total of 199 incidents were reported worldwide during January-September, of which 63 were in the Gulf of Aden and the Somalian east coast.

"What is required is robust action against the pirates' mother ships before they succeed in hijacking vessels," Mukundan said, urging governments to order their navies to disrupt the activities of the pirates and their mother ships," he said.

"The locations and descriptions of these mother ships are known."

Nigeria was ranked as the second most dangerous spot, with 24 reported incidents, of which 20 were in Lagos, though the agency said this represented "only a small percentage of the actual attacks particularly in the oil producing Delta region".

Indonesia was third, with 23 reported incidents, but the agency said these attacks were scattered, and all but two of them were low level incidents involving theft of valuables and stores from the vessel.

Lawlessness is spreading fast onshore as Somalia collapses into the worst fighting for two nearly decades. That is fuelling a wave of piracy that increasingly threatens vessels using the Gulf of Aden, one of the world's most important waterways.

Somali regional officials say the hefty ransoms paid out by ship owners are fuelling corruption and an explosion of piracy offshore that they are unable to contain.

"The shift of piratical attacks from the east coast of Somalia into the Gulf of Aden... has begun to threaten shipping and trade passing through this extremely important trade route between Asia and Europe, IMB's Mukundan said.

This news is a total 1128 time has been read