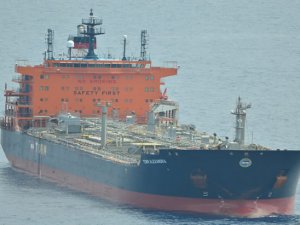 The Italian Navy chased off a group of pirates attempting to the attack a tanker this week in international waters off Benin in the Gulf of Guinea.

The incident took place November 7 when pirates in a speed boat chased the tanker Torm Alexandra. A helicopter crew from the nearby Italian Navy frigate Martinengo was launched and upon arriving on scene found a pirate skiff with what looks to be about 5 or 6 armed pirates on board.

From video released by Italian navy, it appears the pirates were chased away when the Italian navy fired warning shots towards the vessel (skip to 25-second mark in the video below).

A navy team then boarded the Torm Alexandra to confirm no pirates were on board as the crew hid in the ship’s citadel. No injuries to the crew were reported. Shockingly, the incident was just one of three reported in the area in the last few days.

The International Maritime Bureau’s Piracy Reporting Centre reported this attack and two others in the Live Piracy Report.

Thankfully no seafarers were kidnapped in these cases:

Around eight armed pirates in a skiff chased and attempted to board a product tanker underway.

Master raised the alarm, increased speed, took evasive manoeuvres and activated the distress alert. As the skiff closed it opened fire towards the bridge and accommodation.

A Nigerian Navy patrol boat responded to the distress alert. Due to the hardening measures taken by the Master, the skiff aborted the attack.

The patrol boat rendezvoused with the tanker and escorted her to a safe port. Some bridge and accommodation damage was reported due to the firing.

A product tanker underway was approached by two skiffs.

Alarm raised and all non-essential crew mustered in the citadel. The Master increased speed, commenced evasive manoeuvres, activated the fire pump and notified the Regional Authorities.

The skiffs attempted to close in and fired upon the vessel. The vessel’s hardening and evasive manoeuvres resulted in the skiff aborting the attack and moving away. Vessel and crew reported safe.

A naval boarding team boarded the tanker and once clearance was given, the crew emerged from the citadel and regained control of the tanker.

All crew members are reported safe. Over the last several years, the Gulf of Guinea and particularly the waters off Nigeria have emerged as a hotspot for crew kidnappings.

According to the IMB’s latest piracy report, the number of seafarers kidnapped by pirates in the Gulf of Guinea this year has surged as pirates abduct bigger groups of seafarers further offshore.

This news is a total 2586 time has been read
Tags: Pirate Attack: Italian Navy Protects Tanker in Gulf of Guinea