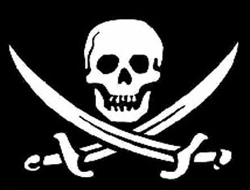 Pirates have become bolder and more dangerous. They are also firing automatic weapons and rockets indiscriminately.

Somali pirates holding an arms-laden Ukrainian threatened to pull out of a deal for its release struck.

Somali pirates holding an arms-laden Ukrainian cargo ship on Sunday accused the owners of stalling on a ransom payment and threatened to pull out of a deal for its release struck. The warning came as the European Union prepared to launch its first-ever naval operation to tackle piracy near the Horn of Africa and after heavily-armed pirates set a Dutch container ship ablaze in an unsuccessful attack off Tanzania. The pirates fired a rocket-propelled grenade at the Dutch-operated vessel during Saturday's attack, 450 nautical miles east of Tanzanian capital Dar Es Salaam, the International Maritime Bureau said Sunday.

The EU naval mission, dubbed Atalanta and comprising six warships and three surveillance planes, officially takes over from four NATO vessels off near the Horn of Africa on Monday.

The EU armada prepared to begin its operation amid delicate negotiations for the return of two of the biggest prizes captured by the pirates, the Ukrainian arms carrier MV Faina and the Saudi supertanker Sirius Star.

A pirate spokesman told that the armed gang holding the Faina was unhappy about the delay in the ransom payment.

"The ship's owners are taking too long to hand over the money," the spokesman, identifying himself only as Ahmed, said by telephone from Hobyo town, near the pirate lair of Harardhere.

"There have been consultations between the force on the ground and on the ship and everyone agreed that if the money is not delivered on time, to abandon the agreement," he added.

3.5 million dollars had been agreed for the ship

Elders in the area who did not wish to be named said a ransom of 3.5 million dollars had been agreed for the ship, carrying 33 Soviet-type battle tanks, rocket launchers and ammunition when it was seized off Somalia two months ago.

Sugule Ali, the spokesman for the group of pirates aboard the Faina, told AFP on November 30 that agreement on a ransom had been reached and it was "just a matter of time and a few technicalities" before the ship and its crew were released, which he said would occur "within four days".

The MV Faina, one of more than a dozen ships held by pirates, was anchored a few miles off the coast of Harardhere, north of Mogadishu, after being moved several times.

The Sirius Star, also moored off Harardhere, is also the subject of long-running negotiations, which have so far failed to produce a breakthrough.

Pirates who seized control of the vessel off Tanzania on November 15 have demanded a 25-million-dollar ransom for the fully-laden tanker from the owners Vela International.

Meanwhile Germany, one of the eight participating countries in the EU force, said Sunday piracy suspects captured by the EU mission might be handed over to third countries such as Somalia's neighbour Kenya for trial.

Foreign Minister Frank-Walter Steinmeier said the EU was reviewing agreements "whereby suspects could be taken by third countries that are willing and in a position to launch criminal proceedings."

Defence Minister Franz Josef Jung said that pirates captured by the EU force could be handed over to "friendly states" seeking the suspects for attacks on their ships.

This news is a total 738 time has been read