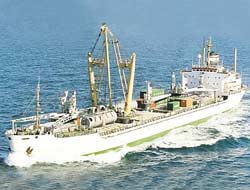 A United Arab Shipping Co vessel was attacked by pirates yesterday (Monday 14th May 2007) 180 nautical miles off the Somalian coast.

Three men in a small craft armed with machine guns and rocket launchers approached the conventional cargo ship as she made her way from Durban in South Africa to Jebel Ali in Dubai.

The attackers ordered the IBN YOUNOS to stop and fired their machine guns at the bridge. The ship's emergency alarm was raised and steps were taken to prevent boarding.

It was then the pirates attacked her with rocket launchers, which destroyed the crew accommodation block. The ship zig-zagged away from her attackers for an hour before they gave up the chase.

The IMB Piracy Reporting Centre says this is the eight attack off Somalia this year and warns vessels who are not heading for Somalia to keep 200 miles out to lessen chances of attack.

That this attack was 180nm off the coast was cause for concern and could indicate that Somalian warlords are making a comeback. The IMB are concerned that such a trend could gravely disrupt vital shipping routes in the area.

The IBN YOUNOS at 15455 grt is a fairly large vessel to be targetted. She was built in 1977 by Hyundai Heavy Industries

This news is a total 1461 time has been read