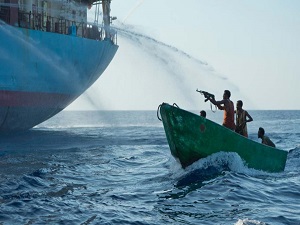 An LNG tanker was chased and fired upon by nine pirates in a speed boat on November 6, around 30 nautical miles southwest of Bonny, Nigeria, the IMB Piracy Reporting Center informed.

The crew raised the alarm, mustered in the citadel, and activated the sip security alert system. “The pirates approached the vessel several times but due to the increased speed and evasive manoeuvres, the pirates were unsuccessful and later aborted the attack,” IMB said.

Both the vessel and crew are reported to be safe. Another attack has been reported in the Gulf of Guinea by the independent security brokerage Asket.

Asket said in an advisory that on November 11, around 10 nautical miles off the mouth of the river Niger, a vessel was attacked by eight armed men with covered faces. The motor vessel was approached by a small blue-colored boat, however, the hijacking seems to have been prevented. Both the crew and the vessel are safe, Asket said citing data from a phone call.

Piracy watchdogs urge mariners to exercise extreme caution when transiting the area. Namely, the Gulf of Guinea has become a major hot-spot for crew kidnappings.  At the end of October, four crew members of an unnamed Singapore-flagged tug/supply vessel were kidnapped some 60 nautical miles south of the Republic of Congo, West Africa, Asian piracy watchdog ReCAAP informed.

A group of 10 perpetrators armed with guns boarded the anchored ship, assaulted the crew and damaged the ship’s radio equipment, before abducting the vessel’s master, chief engineer, chief officer and a member of the deck crew. The abducted crew were taken to a Panama-flagged tanker, previously hijacked by pirates, and reportedly proceeding to Nigeria, ReCAAP said.

This news is a total 1013 time has been read
Tags: pirates, lng, nigeria, gulf of guinea, republic of congo, west africa