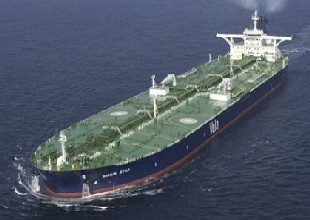 Pirates have seized a giant Saudi-owned oil tanker in the Indian Ocean off the Kenyan coast and are steering it towards Somalia, the US Navy reports.

Pirates have seized a giant Saudi-owned oil tanker in the Indian Ocean off the Kenyan coast and are steering it towards Somalia, the US Navy reports.

The US-bound tanker was captured on Saturday some 450 nautical miles (830km) south-east of Mombasa, and is now approaching the Somali port of Eyl.

The Sirius Star is carrying its full load of 2m barrels - more than one-quarter of Saudi Arabia's daily output.

Its international crew of 25, including two Britons, is said to be safe.

Lt Nathan Christensen, a spokesman for the US Navy's 5th Fleet, said the attack was "unprecedented".

According to the Navy, the ship is "nearing an anchorage point" at Eyl, a port often used by pirates based in Somalia's Puntland region.

War-torn Somalia has not had an effective government since 1991.

A BBC correspondent in Mombasa reports that this is the third tanker to have been hijacked in the region.

The capture of the tanker appears to mark a worrying new development, both in terms of the size of the ship and the fact it was attacked so far from the African coast.

Attacks on shipping off the Horn of Africa and Kenya by mainly Somali pirates seeking ransoms prompted foreign navies to send warships to the area this year.

A number of vessels and their crews have been held captive for months, including the Ukrainian freighter MV Faina, seized in September.

The supertanker was heading for the US via the Cape of Good Hope at the southern tip of Africa, Reuters reports.

The route around the Cape of Good Hope is a main thoroughfare for fully-laden supertankers from the Gulf, the world's biggest oil-exporting region.

It is about as long as a US aircraft carrier and, when loaded, weighs more than three times as much.

The South Korean-built Sirius Star, owned by the Saudi company Aramco, made its maiden voyage in March 2008.

The ship's operator, Vela International, said that all of the crew were reported to be safe.

"Vela response teams have been mobilised and are working to ensure the safe release of crew members and the vessel," it added.

Confirming that two Britons were aboard the tanker, the UK Foreign Office said it could not give any details of their role on the ship.

"We are seeking more information on the incident," a spokesman said.

The other crew are said to be from Croatia, the Philippines, Poland and Saudi Arabia.

Figures from the International Maritime Bureau show that attacks in the area - the Gulf of Aden and the Indian Ocean off the African coast - have made up one-third of all piracy incidents worldwide in 2008.

In the first nine months of the year 63 incidents were reported.

As of 30 September, 12 vessels remained captive and under negotiation with more than 250 crew being held hostage.

Pirates remain active and regularly strike in the region. In the past week alone:

? A Russian warship in the Gulf of Aden drove off pirates who tried to capture the Saudi Arabian merchant ship Rabih

? A Chinese fishing boat was seized off the Kenyan coast

? A Turkish ship transporting chemicals to India was hijacked off Yemen

This news is a total 829 time has been read