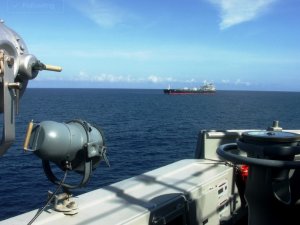 A group of armed pirates has boarded a bulk carrier off the Indonesian coast, the IMB Piracy Reporting Centre said.

The incident occurred on September 30, 2019, when the ship was about 3.7 nautical miles west of Pulau Cula.

In a separate report, piracy watchdog ReCAAP identified the ship as the Malta-flagged Transpacific. The Panamax is operated by Greece-based Alpha Bulkers Shipmanagement, according to data provided by VesselsValue.

As informed, deck crew on routine rounds onboard the 81,200 dwt bulk carrier underway spotted five robbers armed with knives on the aft deck.

The seafarers raised the alarm, activated the ship security alert system (SSAS) and made the PA announcement. As a result, the robbers escaped without stealing anything.

Following the incident, a coast guard boat arrived to escort the ship to Singapore. The vessel was subsequently boarded by the officers and searched for perpetrators.

During the first half of the year, a total of 28 incidents of piracy and armed robbery against ships, comprising 25 actual and three attempted incidents, were reported in Asia, ReCAAP earlier said.