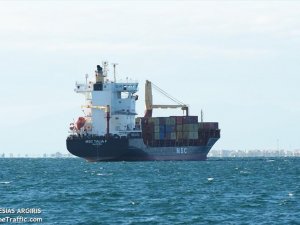 Seven crew members onboard container vessel MSC Talia F have been kidnapped by pirates in the Gulf of Guinea, off the coast of Libreville, Gabon.

The 2005-built, 957-teu MSC Talia F, carrying 17 seafarers, is believed to have been en-route from Lome, Togo to Port Libreville, Gabon at the time of the pirates’ boarding, according to Dryad Global Maritime Security.

“Reporting indicates that the Portuguese-flagged container vessel MSC Talia F was boarded resulting in the kidnap of seven crew,” Dryad Global said on its website.

Dryad Global noted that this is the first incident within this area in 2020. Within 2019 there were four recorded incidents at Port Libreville and the Owendo Anchorage involving a spate of incidents in December 2019.

“One of those incidents resulted in the kidnapping of four Chinese fishermen and lately the crew from a vessel transiting from Douala to Port Libreville,” it recalled.

The 2005-built 957 teu feeder boxship MSC Talia F was boarded by pirates in Gulf of Guinea on Sunday and seven of 17 crew onboard the vessel were taken by the attackers. The incident happened while the vessel was enroute from Lome in Togo to Port Libreville in Gabon. All seven abducted crew members are […]

This news is a total 1251 time has been read
Tags: MIDDLE EAST & AFRICA, PIRACY, GULF OF GUINEA, KIDNAPPING, PIRATE, ATTACKS