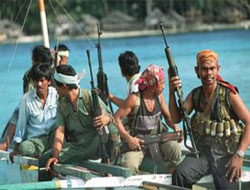 Somali pirates have released a South Korean cargo ship and Thai after receiving ransom payments, according to local reports.

It is believed about 10 ships are now in pirate hands

Somali pirates have released a South Korean cargo ship and Thai after receiving ransom payments, according to local reports. The foreign minister for the semi-autonomous Puntland province, Ali Abdi Aware, is reported as announcing the release of the Thai ship and saying that it was not clear exactly how much money was paid.

Mr Aware, who has been outspoken in his criticism of the payment of ransoms, has reportedly said Puntland forces will be hunting for the pirates. Last Puntland forces freed a Panama-flagged, Somali-owned cargo ship from pirates in a gun battle. One report says a soldier was killed in the fight while other reports says all the casualties were among the pirates.

South Korean officials said the 22 crew of the released Korean-flag vessel were safe but would not say if a ransom had been paid.

It is believed about 10 ships are now in pirate hands, with over 200 seafarers being held captive on their ships. The tense stand-off involving the hijacked Belize-flag, Ukrainian-owned ro-ro Faina continues. The gang holding the ship is reportedly demanding US$8m for the release of the ship, carrying a cargo of 33 tanks and other weapons, and its crew. Several US warships are understood to be still surrounding the vessel.

This news is a total 1256 time has been read