Somali pirates have reportedly hijacked their largest victim vessel yet.

Somali pirates have reportedly hijacked their largest victim vessel yet. According to news agency reports, pirates have seized the 52,454 Panamanian flag bulker Stella Maris. The Japanese-owned ship is registered to Turtle Marine Shipping Second S.A. and managed by MMS Co., Ltd. of Tokyo

The ship was delivered by Tsuneishi Shipbuilding Company in June 2007.

AFP quotes Andrew Mwangura of the Kenyan chapter of the Seafarers Assistance Program as saying the ship was hijacked on Sunday near Calula, in Somalia's northern region of Puntland, said. The agency quotes Puntland presidential advisor Bile Mohamoud Qabowsade as saying "Thirty eight heavily-armed pirates stormed the ship sailing in the international waters in the Gulf of Aden." 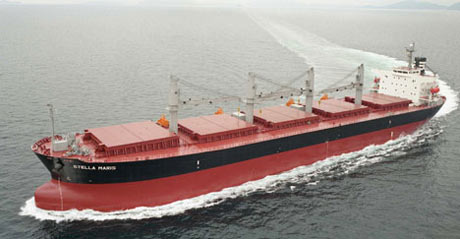 This news is a total 1219 time has been read