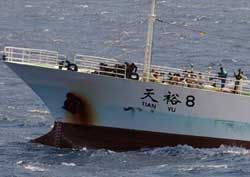 Sevnur Çakmak, Turkish Maritime Magazine Foreign News Editor, spoke to the spokesman of the pirates today early in the morning. Having emphasized everyone in the crew to be healthy and safe, the spokesman asked for 3 million dollars for the ship and the crew.

Last but not least, the pirates sent a message to the cruising military ships in the vicinity through Turkish Maritime saying that they will sink the ship in case of a military operation.