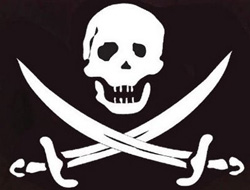 British consumers are being warned they could face shortages of everything from clothes to fuel unless effective action is taken to stop pirates hijacking ships off the coast of Somalia.

British consumers are being warned they could face shortages of everything from clothes to fuel unless effective action is taken to stop pirates hijacking ships off the coast of Somalia.

The effects could become apparent in the run-up to Christmas, says the British Chamber of Shipping. So far this year, more than 30 ships have been hijacked by Somali pirates in the Gulf of Aden, with hundreds of crew members taken hostage.

The rate at which ships are being taken has led the British Chamber of Shipping to warn customers that all supplies that come to the UK and other western European countries from Asia could be put at risk.

Gavin Simmonds, head of international policy at the chamber, says: "Car carriers with vehicles for the UK, foodstuffs from Asia, textiles and clothing, dare I say it in time for the Christmas market, will not be arriving on time if they have to [go round South Africa]. We could begin to see shortages within the next few weeks."

Of the ships pirated this year, most attention has focussed on MV Faina, the Ukrainian vessel carrying tanks and heavy weaponry.

But the majority of ships sailing through the Gulf carry supplies vital to the running of the global economy.

Goods as diverse as oil, gas, cars, textiles and electronics travel past Somalia on their way to Britain.

The alternative route, going round the Cape of Good Hope, would add up to three weeks to the average journey.

However, the International Chamber of Shipping (ICS) says that two companies have already given their captains the permission to go the long way round and others are considering following suit.

Some action is now being attempted to thwart the pirates, whose actions are also disrupting shipments of aid supplies to the war-torn Somali mainland.

A flotilla of naval vessels from 10 Nato nations is now heading for the Gulf of Aden, and two UN Security Council resolutions have been passed condemning the piracy, and urging coordinated action to stop the attacks.

The issue is also being discussed in the European Parliament. But despite this there is a distinct lack of urgency to address the problem, say some experts.

The ICS argues that if commercial airlines were being attacked as often as ships, the reaction of governments would be very different.

"It's taken a very long time to get politicians aware of it and to get real military action under way," says Peter Hinchcliffe from the ICS.

"And whilst all these discussions are going on and whilst the pirates continue to hold ships to ransom, there is a very real possibility that cargos will be held up and deliveries will be delayed."

Insurance companies are increasingly concerned by the dangers. Speciality insurer Hiscox says some of its clients have had their vessels hijacked.

While he acknowledges the frustration within the shipping industry at the lack of attention to the piracy issue, Guillaume Bonnissent from Hiscox doubts that ships will actually start to avoid the Gulf of Aden.

"I don't think we are going to see shortages. I think we are more likely to see ship owners charging higher prices [to cover the increased insurance premiums] which may have repercussions for the consumer."

This news is a total 460 time has been read Major Fire Damages Seven Boats at Port of Bushehr, IranOne day after a senior Iranian military official suggested that a blaze aboard a U.S. Navy amphib was a sign of divine punishment, at least seven boats caught fire at a shipyard at the Iranian port of Bushehr, according to state media. Piracy and armed robbery incidents in Asia almost double in H1 2020The number of attacks on ships in the key waterway of the Singapore Straits doubled in the first half of the year to 16 incidents according to ReCAAP Information Sharing Centre (ISC). Norway's Kleven Verft Acquired From Bankruptcy by Green YardTwo weeks after Kleven Verft filed for bankruptcy a deal has been announced to save the troubled Norwegian shipbuilding group and resume operations under the same management prior to the bankruptcy. Asian waters account for largest share of ships lost at seaIncidences of large vessels lost at sea have occurred mostly in Asian waters, even as such losses on a global basis are at a record low in 2019, according to a review by insurer Allianz Global Corporate & Specialty (AGCS).