Pirates will ask for more money 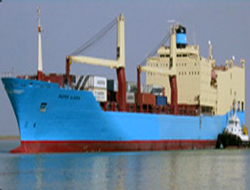 A heavily armed group of American commandos, or US navy Seals special forces, could launch a night-time attack on Maersk Alabama, killing or seizing the pirates who hijacked the ship. The 20 American crew members would be saved and the pirates taken to Kenya to await trial.

That scenario may be envisaged by some in Washington in a dramatic and potentially dangerous escalation in piracy off Somalia, but it was considered unlikely by analysts today.

There are more than 20 warships off Somalia but they are patrolling the Gulf of Aden, many miles from where the Danish-owned, US-flagged, container ship was seized. The hijacking was described by a senior western naval officer as a change in tactics by the pirates in response to the presence of warships farther north. "They are getting bolder, going out into the Indian Ocean in a much more organised way," he said.

French commandos freed yachts and captured pirates last year but the boats involved were small. The consensus among piracy-watchers yesterday was that any attempt to free Maersk Alabama from the hands of pirates would be far too risky.

The Americans are unlikely to try to storm the vessel, said Roger Middleton, author of a report on piracy for the Chatham House foreign policy thinktank. He said: "The pirates will react in a similar way [as in the past] but ask for more money."

There were worries that the pirates might be connected with al-Shabab, Somalia's Islamist insurgency group, but Middleton said that talk of connections with pirates had probably been exaggerated. Western intelligence officials have played down the possibility of such links.

Jason Alderwick, a maritime security expert at the International Institute for Strategic Studies, said his initial reaction was that the hijacking would be played out like others had been: there would be protracted negotiations and any intervention by force was unlikely.

Alderwick said: "The pirates could move very quickly to reinforce their position on the ship." He said any attempt to storm the ship could lead to heavy casualties.

Maersk Alabama is part of the US Maritime Security Programme, a fleet of privately owned vessels considered "militarily useful". It is believed to have been involved in carrying weapons.

Some analysts said the pirates might not at first have realised the significance of the vessel and might want to get rid of their hostages as soon as possible ? for lots of money.

Lee Willett, head of the maritime studies programme at the Royal United Services Institute, said: "My gut reaction is that any military action comes with significant risks and that the US would only take such risks as a last resort."

Armed pirates from Somalia seized a British-owned ship on Monday after hijacking another three vessels over the weekend. About 15 ships have been hijacked so far this year in the Gulf of Aden, according to naval sources, who added that 160,000 ships sailed through the area each year.

This news is a total 658 time has been read