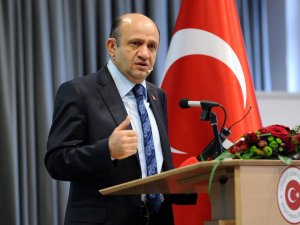 "If we can actualize the concept of the domestic car project, people may need to line up to buy it," he said.

Isik explained that the car is planned for production with its own trademark during Recep Tayyip Erdogan's presidency.

According to Isik, Turkey has steep competition in the internal combustion engine industry because other countries have scaled up to avail of mass production to decrease costs.  He added that it is not easy to create a brand but claimed that there is a world market for new electric cars which offer increased distances without recharging.

"We have a golden opportunity for the next four to five years. Let’s evaluate this time and start the hard work for this project," he added.

According to Isik, the scientific and technological research council of Turkey, TUBITAK, will conduct the research and development work for the car, and again with the contribution of TUBITAK, the private sector will develop the design for the car.

"If a person travels 100 kilometers a day and stays in the same city, he can safely do without fossil fuels such as gasoline, LPG etc. On the contrary he/she may choose electric cars and spend only 2-3 Turkish liras, approx. $1 on a journey," he said.

Isik said that the Turkish electric car will be demanded not only in Turkey, but also in Europe.

"If a country has oil and cheap gasoline, it won’t need this car but countries such as Germany, the U.K., Turkey and France, will need it," Isik asserted.