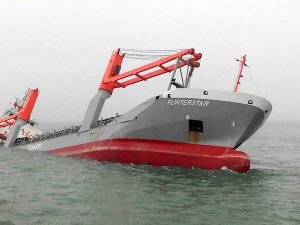 Dutch shipping company Flinter has started talks with salvage and insurance companies to salvage the general cargo ship Flinterstar which sank Tuesday morning after colliding with the LNG tanker Al-Oraiq in the North Sea, some 6 miles off the Belgian port

Flinter confirmed that all crew members who were aboard the 2002-built freighter at the time of the accident are safe and unharmed. The sunken ship’s position has stabilized, according to Flinter.

As World Maritime News reported yesterday, Dutch and Belgian authorities received a report about the collision between the two vessels in the morning hours of October 6.

The Flinterstar’s crew went overboard after the hit, and were rescued from the cold water by the local coast guard teams and the crew of the Al-Oraiq.

Belgian authorities have also been tackling the oil spill coming from the sunken freighter. The spill is reportedly moving towards the coastline.

The Marshall Islands-flagged Al Oraiq is in a stable condition and is currently discharging at Zeebrugge, the vessel’s manager, K Line LNG Shipping (UK) Limited, said.