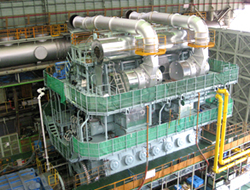 The orders, which were received with an option on additional USTs for four more carriers, marks the first time the MHI group has sold USTs outside Japan. Delivery is scheduled for 2015.

The four UST plants on order consist of four marine turbines and eight boilers. The technology incorporated into the UST was developed by MHI independently. The adoption of a reheating cycle, a field in which the company has a strong track record in onshore commercial power generation plants, results in a near 15% improvement in fuel efficiency compared to conventional steam propulsion plants, making MHI USTs more economical and environmentally compatible.

The USTs on order from HHI will serve as the main engines of PETRONAS’s four new LNG carriers, which will play a major role in transporting LNG produced in PETRONAS’s future LNG projects.

HHI is one of Korea’s leading corporations active in all heavy industry areas. The company operates the world’s largest shipyard, and in addition to ships it also produces a broad scope of products including industrial robots, power generation plants and equipment, heavy machinery, construction machinery and special-purpose vehicles.

MHI-MME is currently undertaking the manufacture of USTs for eight ships under construction by MHI. Leveraging that experience plus receipt now of its first overseas order, going forward the company aims to more proactively pursue UST marketing in a quest to secure a solid position within the global market.

This news is a total 1854 time has been read