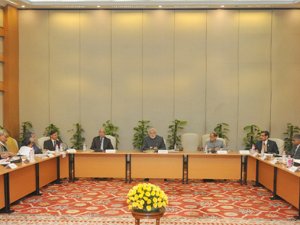 The NITI Aayog made a presentation on various infrastructure sectors including power, coal, renewable energy, ports and coastal development, roads, and railways.

The Prime Minister, Shri Narendra Modi, said the NITI Aayog should focus on quick resolution of inter-departmental and Centre-State issues to speed up the pace of implementation of infrastructure projects. He was chairing a high-level meeting on February 9 on infrastructure. The NITI Aayog made a presentation on various infrastructure sectors including power, coal, renewable energy, ports and coastal development, roads, and railways.

The Prime Minister directed concerned Ministries to work in a Mission mode towards achieving electrification of the remaining 20,000 unelectrified villages, in a clearly defined time-frame. He said innovative solutions should be explored for ensuring total rural electrification, including solar energy, power connectivity through nearby railway infrastructure, and off-grid solutions.

The Prime Minister was informed that issues regarding coal supply to existing power plants have been resolved and not even one power plant today faces a shortage of coal. He reviewed the plans for augmenting solar power generation capacity in the country. As an illustration, the Prime Minister suggested that BCCI could be involved in an effort to convert power consumption of all major cricket stadiums across the country from conventional energy to solar energy.

Reviewing progress in coastal development, the Prime Minister reiterated his call for a Blue Revolution, integrating coastal shipping, tourism, and regional development, through the Sagarmala Project.

The Prime Minister called for a fundamental change in the approach towards redevelopment of Railway Stations, and development of areas contiguous to railway corridors that run through major cities in the country.

Summing up his observations, the Prime Minister referred to his meeting with top international investors during the recent BlackRock India Investor Summit, and emphasized that funds are no longer a constraint for the infrastructure sector. He directed all concerned departments of the Government to work towards creating a holistic framework and environment that will be conducive for investment.

Top Government officers from all related infrastructure Ministries, the PMO, and the NITI Aayog were present at the meeting.

This news is a total 3067 time has been read
Tags: NITI, centre, village