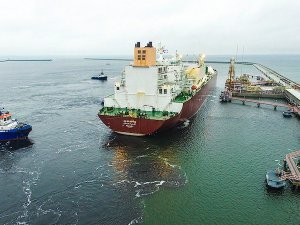 Poland received its first supplies of liquefied natural gas (LNG) from Qatar on Friday, part of a wider plan to cut its reliance on Russian gas.

Poland currently buys the bulk of its gas from Russia’s Gazprom but recently completed an LNG terminal at Swinoujscie on the Baltic Sea and plans to build a pipeline to Norway to diversify its imports. It also aims to become a regional gas trading hub.

The Al-Nuaman vessel, with 206,000 cubic metres of LNG, arrived from Qatar at Swinoujscie port a few hours later than planned due to stormy weather, gas grid operator Gaz-System said.

The delivery is the first that Qatargas will provide to Polish state-run gas firm PGNiG under a long-term deal signed in 2009.

PGNiG said 206,000 cubic metres of gas was sufficient for all Polish households to prepare dinner on gas cookers for three months.

Qatargas’s next delivery is planned for mid-July, followed by one cargo a month in the second half of the year. Poland will import 1.3 billion cubic metres of LNG from Qatar annually.

The Swinoujscie terminal was built at a cost of around 3 billion zlotys ($760 million) and has a capacity of 5 bcm a year, or around a third of Poland’s gas consumption.

PGNiG said it will gradually supplement its long-term Qatargas contract with spot supplies in order to further diversify its gas portfolio. The first spot supply is due from Norway’s Statoil on July 25.

Poland will ramp up imports from Norway once a planned pipeline is completed by 2022. ($1 = 3.9487 zlotys) (Reporting by Agnieszka Barteczko; Editing by Susan Fenton)

This news is a total 7488 time has been read
Tags: Poland Receives First Commercial LNG Cargo from Qatar