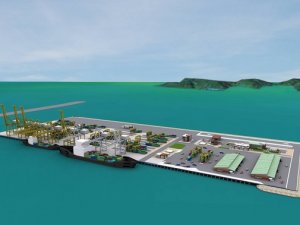 Polish government decided to build a new deep-sea port in Gdansk Bay, capable of receiving up to 100 MMT of cargo per year, reports.

According to preliminary estimates, the construction of the new port will cost PLN 6-9 billion (EUR 1.4-2.1 billion) and should be completed by 2028. The Port Authority of Gdansk plans to announce a tender for a feasibility study for the project by the end of this year or at the beginning of the next year.
“We want to implement this project as soon as possible. The competition in the ports of the North and Baltic Seas is growing very fast. We are struggling not only for servicing customers from Poland, but also from the Czech Republic, Slovakia and northern Ukraine. I am convinced that just in 5 years one or two terminals should work in the Central Port”, – said Lukasz Grejnke, the chairman of the Port Authority of Gdansk.
A new port will be constructed between the mouth of the Dead Wisla and the oil-loading terminal Naftoport.

This news is a total 693 time has been read
Tags: Poland to construct new deep-water port with 100 MMT cargo turnover