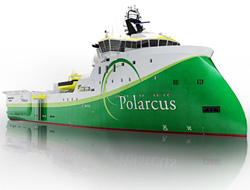 The shares of Polarcus Limited are now registered on the Norwegian OTC list ("NOTC List") and are traded under the symbol PLCS.

The shares of Polarcus Limited are now registered on the Norwegian OTC list ("NOTC List") and are traded under the symbol PLCS.

The company is building six advanced seismic vessels at Drydocks World, Dubai. Designed by Norway's Ulstein Design AS, they have the Ulstein X-bow hull.

Indeed, everything about Polarcus seems much like an Eastern Echo echo.

Be that as it may, the company last month firmed up the contracts for its fifth and sixth ships--two 12-streamer 3D seismic vessels to a new Ulstein type SX134 design.Ulstein Design AS soon after plate cutting ceremonies were held for its second newbuilding.

And on July 2 it announced that it has successfully secured new financing totaling $140 million, comprising equity of $50 million, a 5 year convertible bond loan of $35 million, and a 5 year senior secured bond loan of USD55 million.

This brings the total financing secured to date by Polarcus to approx. $542 million, or 60% of the estimated $900 million project costs for the initial six vessels.

Largest shareholder in Polarcus as of July 8, 2008 is listed as Drydocks World LLC with 36.84 percent. 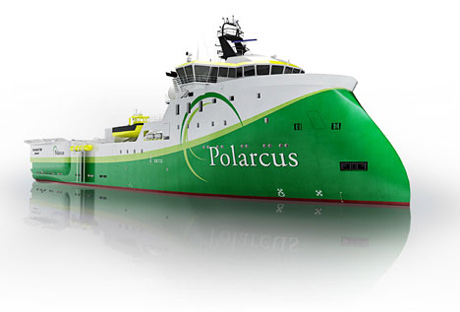 This news is a total 1384 time has been read