Police take 7 into custody over... 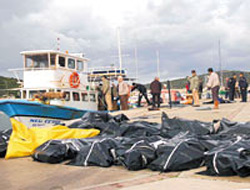 Turkish police have taken seven men into custody under suspicion of involvement in the Dec 8 case in which a boat packed with would-be illegal migrants sank in the Aegean leaving at least 50 dead.

Turkish police have taken seven men into custody under suspicion of involvement in the Dec 8 case in which a boat packed with would-be illegal migrants sank in the Aegean leaving at least 50 dead.

?zmir police announced that seven men reportedly linked to the boat tragedy in western ?zmir were caught on Saturday in the wake of an investigation launched into the incident. ?zmir police and gendarmerie forces launched a joint investigation into the boat tragedy and took Metin A. (41), Muammer G. (39), Muharrem B. (27), Mehmet D. (28) Abdülkadir K. (41), Halil A. (37) and Mehmet O. (26) into custody on Saturday.

A total of 50 people, including one Turk, aboard a boat carrying an estimated 85 migrants are known to have drowned when the vessel sank off Turkey"s Aegean coast on Dec. 8. Many bodies were found in Seferihisar"s S??ac?k bay and two women were among the victims. The 15-meter boat was trying to make it to the nearby Greek islands.

Investigating phone conservations of Hüseyin Güzelcan, the 30-year-old Turkish man whose body was washed up on shore in ?zmir"s Selçuk district on Dec. 14, ?zmir police found out that he had spoken to the seven suspects in question two days before the incident. The suspects were caught by the police and gendarmerie forces in joint operations launched into their addresses in Basmane and Kadifekale areas of ?zmir"s Konak district. Following the operations, ?zmir police noted that Muammer G. was suspected to be the main organizer of the people-smuggling operation.

The search also revealed that the suspects had received a three-day weather forecast that warned a strong southern wind might break out on the day of the incident. Suspects confessed in police interrogation that they were aware of this possible adverse weather but did not cancel the plan. ?Some 90 migrants from Palestine, Somalia, Iraq, Mauritania and Syria were taken from their hotels in the Basmane district of ?zmir province with three vehicles, which were driven by Abdülkadir K. The vehicles took migrants to the S??ac?k coast of Seferihisar district. We took 500 to 2,500 euros from each migrant. Approximately one-and-a-half-hours after the boat set off, it capsized due to a strong southern wind,? the suspects are reported to have said.

This news is a total 602 time has been read