Policies for shipowners from loss 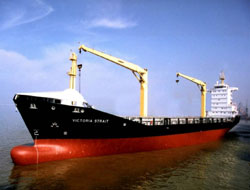 A risk consultancy with close ties to the Lloyd"s insurance market is offering the world"s first insurance policy for shipowners covering potential ransom payouts on crew members who have been kidnapped. Kidnap and ransom insurance is well-established but has traditionally been offered only in respect of individual executives working in commercially sensitive positions or to people whose fame or wealth may attract interest from criminals. International Security Solutions Ltd (ISSL), a City-based company, is offering policies to indemnify shipowners from losses related to paying a ransom for the release of entire crews that have been kidnapped.

The policy, which runs for a year on a global basis, can cover either individual ships or an entire fleet and provides maximum cover of $3 million (£2 million) per insured event. Between 12.5 per cent and 25 per cent of the premium is returnable to the customer if no claim is made ? which is thought to be a first for kidnap-and-ransom insurance policies.

The first such policy was sold this week and ISSL is expecting strong interest after last month"s hijacking of Sirius Star, the Saudi supertanker, by Somali pirates.

John Wick, ISSL"s founding director, said that a company to which he had provided a quote ? but which had not yet bought cover ? had had an incident this week with one of its container ships and had only narrowly escaped.

Mr Wick told The Times: ?Obviously, shipowners are concerned about their costs, but I think they have a moral responsibility to look after their crews.? Mr Wick said that in addition to arranging insurance, his company would provide risk-management advice, including training crews and providing ?target hardening? of a vessel, making it less vulnerable to being hijacked.

Such a tactic generally involves the installation of antipiracy equipment, usually a ?Long Range Acoustic Device?, which fires a nonlethal blast of sound at would-be attackers.

The device, which has been used by the US Army, emits a noise of up to 151 decibels ? louder than standing behind a 747 jet during take-off. The beam of sound can be narrowed or widened to target pirates precisely at up to 300 metres away.

Mr Wick said that ISSL could also arrange for its consultants to be on board vessels as they travel through danger areas and that, if this service is taken up, underwriters would give customers a 10 per cent reduction on their premiums.

He added: ?So far, none of these pirates have fired a rocket-propelled grenade at a tanker, but if they were to do so, there would be environmental damage. So the policy, if it pays out, will also cover the fees of any public relations advisers in the event of the shipowner being criticised for any damage done to the environment.?

Mr Wick, who served in the Parachute Regiment and Special Forces before setting up ISSL, said that the policy also covers ensuring that any ransoms are actually paid to kidnappers.

He added: ?Some organisations are charging between $1 million and $1.5 million to actually get the money to a kidnapper. That is an additional cost, which has to be paid by the shipowner, on top of the ransom itself, and so this is considerably cheaper.?

? The cost of buying insurance cover to send ships through volatile areas has soared since piracy began to take root off the coast of Somalia, with premiums covering cargos rising more than tenfold since January

? Companies buy cover for an array of risks, including damage to ship hulls, loss or harm to cargos, terror attacks and kidnap and ransom costs

? Costs vary depending on the journey taken and the value of the ship"s contents, but it can cost up to $1.5 million to insure a fleet of ships for damage to their hulls alone on a single journey through the Gulf of Aden

? Pirates tend to demand initial ransoms of up to $50 million, but allow the price to drop to an average of about $3 million per boat seized

? The cost of insuring the crew and the boat that drop off the ransom for the pirates also has to be taken into account when calculating premiums for piracy insurance