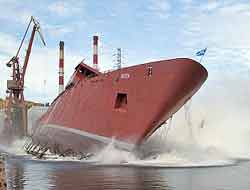 In November 2005, after winning an open EU tender, Remontowa S.A. signed the contract with Scottish Ministers represented by Scottish Fisheries Protection Agency (SFPA) for the design, construction and delivery of a Fishery Protection Vessel.

The vessel is being built by Remontowa in Poland and the launch took place at their subsidiary Northern Shipyard. The launching ceremony was conducted by Mrs Jacqueline Horsburgh, wife of the Agency’s Marine Superintendent.

Following the launch, Remontowa will now be completed in the fitting-out of the vessel. She is scheduled to be handed over to the Agency in December 2007.

This appears to represent some slippage in the programme as the vessel was expected to be launched in May and delivered in October according to previous statements on her construction by the SFPA.

The primary function of the vessel covers fishery protection operations in waters surrounding the mainland and islands of Scotland. In addition the ship will operate in the North East Atlantic Fisheries commission waters beyond the 200 mile limits. The areas of operation include open sea, shallow coastal waters and estuaries and sounds with strong tidal currents.

The vessel has a single screw, with diesel electric propulsion comprising three generators, and two propulsion motors. Marine gas oil will be the fuel used throughout. She is built to meet the UMS standards with full bridge control.

The vessel is arranged with an open clear working deck aft. The arrangement of the working deck and associated deck machinery is designed for safe operation utilising a minimum crew on deck.

The vessel is designed for operation throughout the patrol area in all seasons and to achieve maximum efficiency for boarding boat operations, with deck arrangement, stability and sea-keeping properties to be optimised and co-ordinated to provide a safe working platform in conditions up to winds of Beaufort force 6 and sea state 5-6.

The contract when awarded caused a storm of protest on Clydeside with accusations that the Scottish Executive was being too diligent with EU procurement laws at the expense of Ferguson Shipbuilders. It has been reported recently that Ferguson's have said they will not bid for a new Calmac ferry for delivery in 2010 as there is a shortage of marine engines and they fear the ywould not be able to maintain a delivery schedule.

This news is a total 574 time has been read