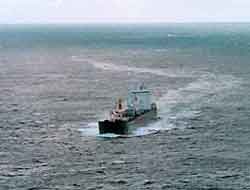 Oceangoing vessels are rapidly overtaking vehicles as air polluters by producing more sulfur dioxide than all the world's cars, trucks and buses combined, according to an international transport and environmental group.

Oceangoing vessels are rapidly overtaking vehicles as air polluters by producing more sulfur dioxide than all the world's cars, trucks and buses combined, according to an international transport and environmental group.

It said such efforts are needed to address the public health consequences and the contribution these sources of growing pollution make to global warming.

The report also accused the International Marine Organization, an agency of the United Nations, of being slow in adopting the best available technologies and fuels.

"Air pollution from diesel trucks and buses in Europe, Japan and the United States has declined steadily for over a decade. At the same time, air pollution from international ships is rising virtually unchecked."

The study found that the sulfur content of marine fuel was far greater than that of diesel fuel used by vehicles. Globally, ships use fuel with an average sulfur content of 27,000 parts per million, compared with just 10 to 15 ppm for road fuels in developed nations.

It was also noted that air-quality effects from oceangoing vessels were especially significant in port cities with extensive coastlines next to shipping routes.

Using data on geographic marine activity, estimates have roughly 70 to 80 percent of all ship emissions occurring within 400 kilometers of land.

Carbon-dioxide emissions from the international shipping sector as a whole exceed annual total greenhouse gas emissions from most of the developed nations listed in the Kyoto Protocol.

A separate report by the think-tank Civic Exchange called Hong Kong and Shenzhen the densest shipping and related logistics area in the world due to geographically small port areas and the distance between the two cities.

The March 2006 report found marine sources belched 21,000 tonnes of particulate matter, carbon dioxide and nitrogen and sulfur oxide into the air in 2003 in this area, compared with only 10,000 tonnes in 1990.

The same report found that, from 1990 to 2003, emissions from land vehicles decreased compared with a steady rise in marine pollution, while aviation sources were steady.

"The government has to look at emission control as a critical part of public health management. So far, it has refused to link the two," Civic Exchange chief executive Christine Loh Kung-wai said.

"Based on the Environmental Protection Department's own commissioned research, it knows air pollution is having an impact on residents in Hong Kong, particularly those who live and work in the harbor areas."

She felt that any approach would have to be brought as a package to tackle the various sectors intimately tied with marine pollution and it was now time to address the issue as other ports were already taking action.

ICCT executive director Drew Kodjak, the report's co-author, said the cost of cutting one tonne of nitrogen oxide from the emissions of an oceangoing ship was US$11 (HK$85.80), compared with US$1,900 and US$6,500 for cars in the United States and Europe, respectively.

The report said the processes for establishing new regulations were further complicated by the relationship between "flags of convenience" that most ships are registered under, and large shipping interests typically headquartered in other countries that own most of the ships.

"The growing patchwork of local rules and regulations is not ideal for environmental protection or the shipping industry. Cleaning up air pollution from ocean shipping at the international level is a win-win situation for commerce and our environment," said Kong Ha, a senior officer with the Environmental Protection Department.

The IMO's current sulfur cap at 4.5 percent is several thousand times higher than the sulfur in fuel used on roads in Western nations. According to the report, lower sulfur fuels, optimized engines and exhaust after-treatment will significantly improve the performance of marine vessels, while emissions from ships in port can be further cut by using shore-side electricity sources.

Californian and European regulations now require low-sulfur fuels in coastal waters, inland waterways and at ports, with California requiring use of 0.5 percent sulfur fuel in the state's coastal waters and in port.

Sweden has experimented with market-based strategies, instituting a system of environmentally coded fairways and port dues based on the emissions of a particular ship. That has led to increased use of lower-sulfur fuel and after-exhaust upgrades on ships calling at Swedish ports.

Sulfur oxide emission-control areas such as the Baltic Sea, and soon to include the North Sea and English Channel, will bar heavily polluting vessels, with recommendations to extend controlled areas to the Mediterranean, parts of the north Atlantic and the Pacific Rim.

The ICCT is also pushing for the fuel sulfur limit in sulfur-oxide emission control areas to be lowered to 0.5 percent. This single move, reducing the cap from the current average of 2.7 percent, would reduce sulfur oxides generated by ships by 80 percent and particulate matter by 20 percent.

This news is a total 9844 time has been read