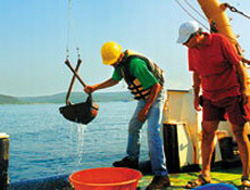 In Aegean Region environmental pollution has being investigated by 9 Eylül University Sea Sciences and Technology Institute pursuant the project "MED-POL Long Dated Measurement and Investigation about Sea Pollution" with the support of Ministry of Environment and Forestry.

Saying "Now the project is at fourth stage." Küçüksezgin continued "By picking sediment from a lot of areas of Aegean Sea, we will determine the guilty of this pollution"

Telling also Orta Do?u Teknik University(ODTÜ) started investigations in Mediterranean Sea, Küçüksezgin added that they also work together in that project. "We pointed some parts of the sea specifically and we control this area's sediments every year, that pointed and hot points are under heavy pollution." Meriç Delta, Edremit Gulf, ?zmir Gulf, Gökova and Marmaris are three of this points.

Other points are not in that danger, but they are on the board of pollution. We can give the entrance of Dardanelles, Dikili and Çandarl? Gulf.

Prof Dr Küçüksezgin said that they froze the sediments and the sands collected from the sea, then they were examined in the laboratory in the ship. Then he added "After the results we will report these to Ministry of Environment and Forestry."

Prof. Dr. Küçüksezgin after saying " We continues the investigations that are done from the earth and this happens permanently" she continued " especially the exemplar picked from the end of the rivers to Aegean and Marmara Sea. And we determine the pathogenic bacterium."

Remembering: "Within the project we analyze the dirtier items of the rivers too. And as the result of that the first one makes the North Aegean polluted most is Meriç River, and we reported this too."

This news is a total 725 time has been read