Port Canaveral Gets Under Way on New Cruise Terminal 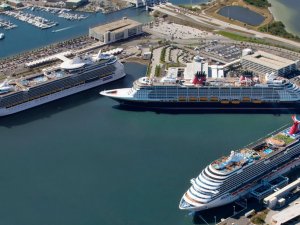 Port Canaveral is under way towards the construction of its next cruise terminal.

The Canaveral Port Authority (CPA) has contracted with CH2M Engineering to provide the waterside design, engineering and support services for Port Canaveral's new Cruise Terminal 3. CH2M will assist the port in securing permits from various state and local agencies including the U.S. Army Corps of Engineers, the U.S. Coast Guard, the Environmental Protection Agency, and Florida Fish and Wildlife Conservation Commission.

The port's commissioners approved the funding for CH2M's project management contract in June, taking the first step in a two-year work plan to build an 8,000-passenger facility. The new terminal will replace one of Port's oldest cruise terminals, which is currently being used for single-day port of call vessels.

The Port will invest $150 million for the new terminal, in addition to the $195 million that it has invested in the Port's cruise terminal infrastructure over the past few years. When complete, the facility will generate enough business to support an estimated 4,000 permanent jobs. The port has many other planned investments, including channel dredging and improvements to cargo piers.

Port Canaveral is the second-busiest cruise port in the world, serving four million passengers per year, and it is the third-busiest port in Florida by earned revenues. Port Canaveral CEO Capt. John Murray emphasized that the new terminal will help the port to sustain its rapid growth. "Port Canaveral continues to experience growth in all sectors, and particularly in our cruise business," said Port Canaveral CEO Captain John Murray. "With 80 percent of our revenue from cruise operations, it's important that we continuously improve our capabilities to meet the current and future needs some of the world's largest, most sophisticated cruise ships." Murray emphasized that the construction staging will be carried out in a way that minimizes effects on the popular public park adjacent to the site. In addition, the port will maintain cruise terminal parking at current levels as a priority.

This news is a total 527 time has been read
Tags: Port Canaveral Gets Under Way on New Cruise Terminal