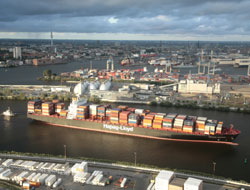 Hamburg's senate is set to bring forward investments worth ?250m.

Hamburg's senate is set to bring forward investments worth ?250m.

Hamburg's senate is set to bring forward investments worth ?250m, much of which is destined to the poured into the city"s port infrastructure, in a bid to prevent economic slowdown.

According to Axel Gedaschko, Hamburg"s senator (minister) for ports and economy, the city has benefited from globalisation thanks to its container port. The number of unemployed people is with 70,000 at a low level. ?But we know that this situation will not continue,? said Mr Gedaschko.

?The shipowners expect the container volume to decline by 10% in 2009,? said Mr Gedaschko.

A total of ?2.9bn will be invested in the port infrastructure with the goal to obtain a turnover capacity of 18.1m teu in 2015. The Hamburg port authority will get ?250m each year until 2012. The first investment project is the quayside railway in 2009, which will cost ?76.4m.

The Hamburg port companies association (UVHH) welcomes this step. ?From the point of view of the port industry, renewing and enlarging the tracks in the port is an important precondition to cope with the expected container volume of 18.1m teu in hinterland traffic,? said Klaus-Dieter Peters, president of UVHH.

This news is a total 925 time has been read