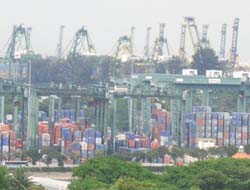 Zim started calling Portland in mid-2006, helping the port recover from the losses of "K" Line and Hyundai, which both pulled out in 2004. The shipper's Portland service connects the city to several ports in China and the Middle East.

"Our expectation is we can and will recover the lost business," said port spokeswoman Martha Richmond. "Our market is growing."

The port had been on pace for the best year of any major West Coast cargo port. As reported in the Business Journal last month, the port handled 58 percent more cargo in the first four months of this year than last year. No other West Coast port has achieved even a double-digit increase.

Some ports, such as the Port of Seattle and the Port of Oakland, have been losing cargo volumes. Experts attribute the declines to shippers returning to Southern California after the resolution of problems stemming from a 2002 strike by longshoremen.