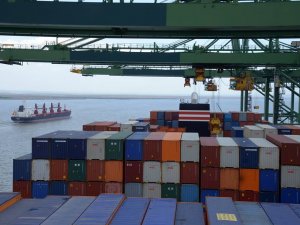 The Port of Antwerp in Belgium revealed that its yearly container volume has risen above 10 million TEUs for the first time in the history of the port.

The box volume increased by 4.1% during the past 12 months and the port expects to end the year at around 118 million tons.

Antwerp’s roll on/roll off  (RoRo) volume has declined by 1.9%, totaling 4.6 million tons at the end of the 12-month period. This negative result is due to the performance on the export side, as RoRo exports to Africa and the Near East are down by 15% and 18% respectively. On the import side, however, the ro/ro volume is up by 9.5%, according to the port.

The conventional breakbulk volume for its part contracted by 2.4%, ending the year at 9.8 million tons.

The liquid bulk volume this year is up by 4.5% to 69.7 million tons, with tank storage companies experiencing particularly strong growth, the Port of Antwerp said.

“Liquid bulk is also showing year-on-year expansion and with an estimated volume of just under 70 million tons it’s the second main foundation on which freight growth in Antwerp is based,” according to the port.

The volume of dry bulk continues to decline – after four quarters the figure stood at 12.4 million tons, a fall of 9.8% compared with the same period in 2015.

During the twelve months of this year, Antwerp welcomed 458 container carriers of 13,000 TEU or more, whereas last year the number in this category was only 320.

The port of Antwerp said it will close 2016 with an expected record volume of more than 214 million tons of freight handled.

This news is a total 1075 time has been read
Tags: Port of Antwerp Posts Record Yearly Box Volume