Port of Antwerp sets another freight record in 2014 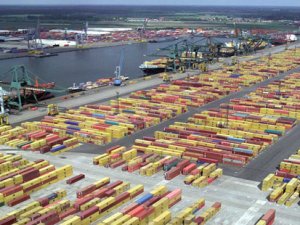 The port of Antwerp is expected to handle a total of 198.8 million tonnes of freight by the end of this year. That’s an increase of 4.2% in comparison with 2013 and a new record for the port.

The previous record dates from 2013, when the freight volume came to 190.8 million tonnes. The record growth was driven by container handling (up 5.6%) and liquid bulk (up 5.4%). The other side of the coin is the contracting volume of labour-intensive breakbulk (down 3.3%) and dry bulk (down 4.9%).

The container trade shows impressive growth, both in tonnes and in number of boxes. The number of standard containers (twenty-foot equivalent units) rose by 4.5% to 8.96 TEU. This means that Antwerp should pass the 9 million TEU mark next year. In terms of tonnage also, the growth was more than respectable, up 5.6% to 108.1 million tonnes.

The ro/ro volume, however, was down by 1.2% to 4.51 million tonnes. The figures are mainly due to a decrease in the number of cars handled. By the end of this year its is expected that 1.2 million cars will have been shipped in and out of the port of Antwerp, 7.8% fewer than in 2013. The lower volume is due among other things to the Ebola outbreak in West Africa, the unrest in the Middle East and the poor economic situation in Argentina and Brazil, all of which are important markets for second-hand cars.

Conventional breakbulk for its part was down by 3.3% and is expected to total 9.75 million tonnes for the year as a whole. But despite this decrease, breakbulk is still very important for employment in the port, accounting for some 40% of dock labour.

The liquid bulk volume expanded over the past 12 months by 5.4% to 62.7 million tonnes. After the record year of 2013 in which the total growth of liquid bulk surged by 31.4%, this year’s figures are still very significant. Exports of liquid bulk in particular rose strongly by 17.8% because of the greater trading activities of some players. Imports for their part remained more or less stable.

The petrochemical cluster in the port of Antwerp made positive news several times over the past year. There was the investment by ExxonMobil, the American oil giant which announced a commitment of 1 billion dollars to its refinery in the port of Antwerp. The new facility will convert heavy, high-sulphur oil residue into cleaner oil products and transport fuels such as diesel and gasoil for shipping. The French group Total for its part is similarly investing 1 billion euros in its Antwerp site. Further developing this petrochemical platform is one of the major ambitions of Antwerp Port Authority for the near future. For this purpose it has set up an Oil & Chemical taskforce which will collaborate with FISCH and Essencia to create ideal conditions for attracting international investors to Antwerp.

The dry bulk volume contracted by 4.9% to 13.67 million tonnes. This continued downward trend is caused by the decline in coal imports, due mainly to the closure of various coal-fired power stations in the immediate hinterland of the port. This trend is not expected to reverse anytime soon.

During the past 12 months 13,978 seagoing ships called at the port of Antwerp, 1.7% fewer than in the previous year. On the other hand the gross tonnage was up by 1.5% to 334.68 million GT. The number of ULCS (ultra-large container ships of 10,000 TEU or more) is expected to reach 265 this year, 67 more than in 2013. The growth is particularly marked in the category of 13,000 TEU and more, with no fewer than 80 of these giant container carriers calling at Antwerp this year.

At the beginning of January (ETA 7 January) the Morten Maersk is expected in Antwerp, which at 18,000 TEU is still the largest container ship in service anywhere in the world.

This news is a total 1399 time has been read
Tags: The port of Antwerp, million, TEU