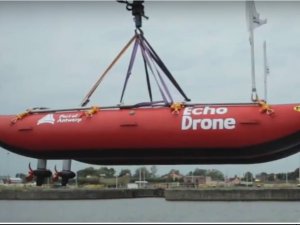 Port of Antwerp has reached a new milestone with the introduction of a fully automatic sounding boat that employs unique technology.

The vessel, named the Echodrone, is a prototype that is currently being developed to supplement the other operational sounding boat, the Echo.

Both of these carry out measurements of the water depth everywhere in the port so as to guarantee safe passage for shipping. The cloud-based technology – a first – has been developed in partnership between the Port Authority and dotOcean and is only one of the many initiatives being taken by the Port Authority in the field of digital innovation.

Innovation is a powerful response to today's fast-changing world and so is a main component of the future vision of Antwerp Port Authority. In collaboration with the port community the Port Authority is constantly working to develop new technologies and methods and to incorporate them in its operations.

"As a world-class player we as a port aim to be a leader in developing innovative concepts," explains Piet Opstaele, Innovation Enablement Manager at Antwerp Port Authority. "In this way we are laying the foundations for the 'smart port' of the future in which digital technologies are used to make the land-based and water-based operations more flexible, responsive and efficient."

One of the Port Authority's responsibilities is inspection and maintenance of the maritime infrastructure, including the beds of the docks. Regular measurements of the water depths at the berths and at all other points are carried out, both to ensure safe passage and mooring for ships and to plan the necessary maintenance dredging work.

So far this has been done using the Echo sounding boat, but now an innovative autonomous sister boat has been developed in collaboration with dotOcean in order to help with the work. The new vessel, named the Echodrone, is smaller than the Echo and is fully autonomous, operating on its own without anyone on board. This makes it more nimble and flexible so that it can even operate in heavy shipping traffic where the Echo would be unable to go.

Wim Defevere, Senior technical manager nautical access of the Antwerp Port Authority: ”The Echodrone is currently undergoing extensive trials. Once these have been completed it will be based in the Deurganck dock where it will be fully operational alongside the Echo to measure the water depth of the available berths at the busiest of the tidal quays for handling containers.”

Unique technology for guiding and operating the Echodrone has been developed in collaboration with dotOcean, a maritime technology company based in Brugge, Belgium. "This technology is based on assembling detailed information in the cloud," explains dotOcean co-founder Koen Geirnaert. "Data from all sorts of devices throughout the port is made available over the internet and then selectively compiled and translated into useful information by algorithms in the cloud. The Echodrone is designed to navigate fully independently using this verified data, unlike the previous generation of automatic vessels that had to rely on their own onboard sensors. This makes the Echodrone one of the first of a completely new generation of robots."

Piet Opstaele adds: "With the help of the Echodrone it will be possible in future to carry out other types of measurements, such as environmental surveys, inspecting quay walls and so on. This technology is a real breakthrough for us in our quest for smart solutions for the port of the future. It is also a good example of our role as an initiator and facilitator of innovative initiatives."

This news is a total 2247 time has been read
Tags: Port of Antwerp Tests Autonomous Sounding Boat