Port of Antwerp to Get New Tanker Terminal 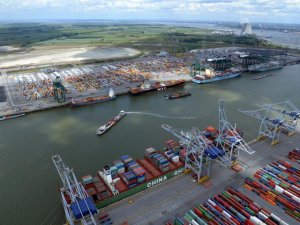 As part of the massive investments planned for Belgium’s port of Antwerp in the next few years, the SEA-Invest group said it would construct a new tanker terminal in the Delwaide dock representing an investment of EUR 250 million (USD 279.9 million).

In the same dock the group will also operate an independent container terminal that it has acquired from Independent Maritime Terminal (IMT).

This facility is currently located in the Hansa dock but will be moved to the Delwaide dock where there is space for further development with an additional investment of EUR 50 million.

Other new activities not directly related to the waterfront will help to reutilise the space released in the Delwaide dock.

Additionally, Houston-based terminal operator Zenith Energy has now chosen the Right bank of the Scheldt in Antwerp where it would invest EUR 250 million.

Given the size of the project which this company wishes to carry out in Antwerp, and taking into account also the limited quay length available in the Delwaide dock, the alternative site was chosen in the ARA (Amsterdam-Rotterdam-Antwerp) region.

While in the Hansa dock the SEA-Invest subsidiary SEA-Tank Terminal plans to build additional tank capacity for Total on the concession that it acquired from the IMT container terminal, representing an investment of EUR 100 million.

On this concession site it will initially build additional tank capacity of 160,000 m³ for Total, with further potential for expansion. The additional capacity will act as an extension of the neighbouring SEA-Tank Terminal facility. The existing terminal became operational in 2010 and was expanded by 340,000 m³ in 2013. It currently has a capacity of 860,000 m³.

“Thanks to the huge interest in the port area we have been able to select projects that offer the highest added value for the port area as a whole,” Port Authority CEO Eddy Bruyninckx, said.

This news is a total 2438 time has been read
Tags: Port of Antwerp to Get New Tanker Terminal