Port of Auckland’s Profit Down 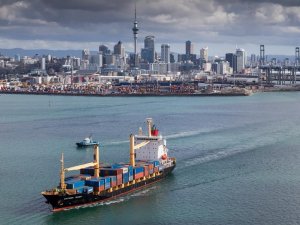 Challenging times have pushed the Ports of Auckland’s full-year net profit to $63.2m compared to $74m last year, down 14.6%.

The port attribute costs to increases in infrastructure repairs and maintenance, Unitary Plan processes and development of future initiatives.

“There is much about our performance of which Aucklanders can be proud. We have made better than expected progress replacing container volumes after Maersk moved a major service away from Auckland early in our financial year. Container volumes finished the year 0.4% up, against expectations that volumes might fall.

“Multi-Cargo volumes have held up well, with car volumes increasing 17.4% to a record 243,801 units. Total breakbulk tonnage (including cars) was up 4.4% on the year before,” said Chief Executive Tony Gibson.

Total group revenue was $218.3m, down from $221.2m the year before, reflecting the sale of the company’s subsidiary Connlinx part way through the year.

Ports of Auckland has declared a $41.7 million dividend for Auckland in the 2015 financial year.

“There were several unusual items this year which reduced our reported profit and dividend compared to last year’s record level. $7.3 million has been put aside to cover costs and provisions for the Bledisloe Wharf extensions following the High Court’s decision to over-turn the consents granted by Auckland Council”

In addition, some $4 million was incurred related to wharf and building demolition and $2.4 million were made in severance payments to workers who left the port after settlement of a collective agreement with the Maritime Union.

Speaking of the prospects for the coming year, Gibson said the expectations were subdued due to lower dairy prices and a fall in the New Zealand dollar, resulting in softening in some import trades, slower growth in car volumes and a decline in bulk exports.

“We are investing in a North Island supply chain network, with new freight hubs in the Manawatu and Bay of Plenty, and an expansion of our existing freight hub in South Auckland.”

“To improve productivity and capacity, we are investigating partial automation of our container terminal. We are currently consulting staff and will shortly commission a scoping study. A decision on whether or not to proceed will be made in early 2016.”

“In October we will finish a 50m wharf extension at Fergusson Container Terminal and start construction of Fergusson North Wharf. These projects increase our terminal berth space by around 50% and are essential for handling growth in both ship size and trade volumes,” Gibson added.

This news is a total 68677 time has been read
Tags: New Zealand, ports of Auckland.