Port of Belfast to expand Pollock 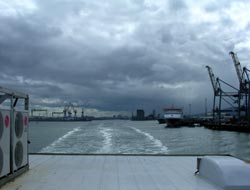 The Port of Belfast has announced plans for a £4.5m expansion of its paper and newsprint handling facilities at Pollock Dock.

The Port of Belfast has announced plans for a £4.5m expansion of its paper and newsprint handling facilities at Pollock Dock.

The Port of Belfast has announced plans for a £4.5m expansion of its paper and newsprint handling facilities at Pollock Dock. Last year the Port handled 137,000 tonnes of paper products with regular services from Scandinavia and Canada. Development of the new facilities will consolidate the Port's position as the island's leading bulk paper importer and create 75 construction jobs.

Paper products sourced through Belfast are used by printers throughout Ireland, including the main printing presses in Belfast, Dublin and smaller regional printers as far away as Cork.

Prior to opening its first dedicated paper store in 1997, Belfast didn't handle any paper imports. The new 78,500 sq ft investment, which will hold up to 8,000 tonnes of paper, will increase the Port's capacity in the sector by 70%. The work will also include an upgrade of the quayside at Pollock Dock.

"Back in the 1990s the Port began investing in bespoke facilities for trades such as paper and steel, giving us the opportunity to compete for and win customers well beyond the Port's natural hinterland.

"The chances are that if you're reading this story in a newspaper then the newsprint you're holding in your hand came in through the Port of Belfast From nothing just ten years ago, paper imports are now an important part of the Port's diversified trade base - a good example of how niche investments can yield long-term benefits.

"Despite the advent of the Internet and digital news, the demand for magazines, newspapers and paper products remains strong, and while there may be a short-term dip in trade during the current economic climate, the long-term prospects for the business are good.

"Last year the Port committed itself to a £630m capital investment programme which will deliver a new generation of facilities for Port customers and the wider economy over the next 10 -15 years. The upgrade of facilities at Pollock Dock is part of that ongoing process."

In addition to newsprint and stationary, a significant element of the material imported through Belfast is used for general packaging as well as more specialist materials for the food and pharmaceutical sectors. Canadian vessels with an average cargo of 3,500 tonnes call at Belfast on a monthly-basis while smaller Scandinavian vessels call fortnightly.

Named after a former Chairman of the Harbour Commissioners, Pollock Dock and Basin dates back to the 1930s when it was built during the creation of the Herdman Channel, originally to help accommodate Belfast's rapidly growing bulk grain trade. In the 1950s it was home to the Port's first Roll-on / Roll-Off service while in the 1970s it was used in part as a container terminal.

The new work should be completed for 2009.

This news is a total 734 time has been read