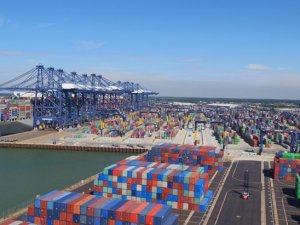 UK's Port of Felixstowe is facing huge congestion amid a sharp spike in import container volumes and late vessel arrivals.

“The weekly import volume for the last two weeks has been over 30% higher than average levels.

“This is exacerbated by unusually high levels of empty containers at the port and the impact of the ongoing Covid-19 crisis on resource availability,” the port said on Friday, September 18, apologizing for the inconvenience caused.

British International Freight Association (BIFA) said the freight forwarders were unable to restitute empty containers to the port of Felixstowe until September 23.

Robert Keen, Director General of BIFA, said the operational performance at Felixstowe has been very challenging for some time due to COVID-19 pandemic, but that the issues have escalated.

As disclosed, the congestion has led to significant haulage problems for BIFA members whereby many containers can neither be collected nor returned.

“Empty containers will have to be restituted inland container parks, which will lead to an escalation in haulage costs for members using merchant haulage; as well quay rent and demurrage issues, which are difficult to pass on to our members’ customers,” Keen said.

BIFA Director General believes the root of the current VBS problems is the migration to a new in-house terminal operating system in 2018 including an increase in container moves ahead of the Golden Week in China; reduced container moves per hour at the quayside and serious staffing issues.

BIFA called on the port to discuss compensation for the damage caused and the increased costs that have been incurred by its members.

“At the very least, the port authority should extend free-time for quay rent and demurrage,” he pointed out.

In order to bring performance levels back to normal, the Port of Felixtowe is increasing its VBS booking availability to over 4,300 vehicles per day.

It will also open on Sunday for haulage collection, and work to temporarily slow down and reduce the number of empty containers being returned to the port by rail and road, to ensure it doesn’t run out of storage space.

The port said it would recruit and train over 100 additional front line equipment drivers which had not been possible during the lockdown.

Furthermore, the port is working on Improving labour availability and preparing for a possible second wave of COVID -19, by securing private testing for its employees to minimise the period people need to self-isolate if they, or a family member, display symptoms.

This news is a total 2399 time has been read
Tags: Port of Felixstowe battling heavy congestion