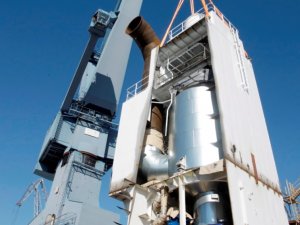 The Port of Karachi in Pakistan has joined the list of ports enforcing a ban on discharge of wash water from open-loop scrubbers, according to Standard Club.

(T)he discharge of wash-water from open-loop scrubbers is prohibited in port. While in the port, vessels fitted with hybrid type of scrubbers should switch to the closed-loop mode of operations,” the marine insurer said, referring to a circular issued by the Government of Pakistan, Ministry of Maritime Affairs.

“As for vessels fitted with open-loop scrubbers, they would need to switch over to compliant fuel instead.”

The circular advises ships to carry out this switch-over well in advance of the ship’s arrival in port waters so that any operational issues can be identified and dealt with before the ship enters Pakistani waters.

The announcement follows the entry into force of the International Maritime Organization (IMO) sulphur cap on January 1, 2020. Under the new regulation, the limit for sulphur in fuel oil used on board ships operating outside designated emission control areas is reduced to 0.5% from 3.5%.

In order to comply with the upcoming regulations, some shipowners installed scrubbers while others use compliant fuels. Many shipowners have opted for open-loop scrubbers that use sea water as the process fluid and discharge the treated water overboard.