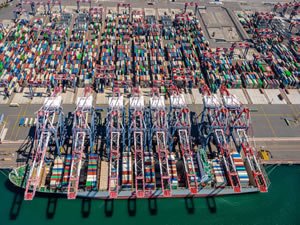 The Port of Long Beach has reported its busiest November on record as retailers make the final push before the holidays.

The strong volumes could be attributed to imports which jumped a similar 30.5% to 382,677 TEUs. Exports were down 5.2% to 117,283 TEUs. Empty containers shipped overseas rose an astounding 55% to 283,563 TEUs, reflecting the significant trade imbalance and contributing to freight rates that have soared to record highs.

“Online shopping and PPE purchases are on the rise as consumers continue the stay-at-home lifestyle, but the overall economic outlook is uncertain with another wave of COVID-19 spreading across the country,” said Mario Cordero, Executive Director of the Port of Long Beach. “We’re dealing with the surge in containers by partnering with stakeholders, utilizing a temporary storage yard and prioritizing dual transaction truck trips that balance inbound and outbound cargo flows.”

The Port of Long reported it had 87 container ship calls in November, 17 of which were unscheduled vessels that made up for voyages canceled earlier this year.

“We appreciate the strong effort of our dockworkers who are moving an incredible amount of cargo during the second half of 2020 after a slow start for the year,” said Long Beach Harbor Commission President Frank Colonna. “We remain cautiously optimistic and intend to maintain the high level of service that the Port of Long Beach is known for.”

This news is a total 2554 time has been read
Tags: Port of Long Beach , November Volumes Jump 30%