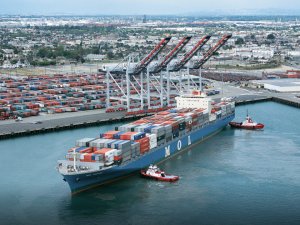 The Port of Los Angeles processed 577,865 Twenty-Foot Equivalent Units (TEUs) in March, a decrease of 27 percent compared to last March.

The expected decline came after a record February when shippers moved cargo ahead of the Lunar New Year holiday celebrated in Asia.

“We’re comparing our numbers to an extraordinary 29 percent volume gain last March so a decline is not unexpected,” said Port of Los Angeles Executive Director Gene Seroka. “Lunar New Year timing and subsequent canceled or reduced sailings played a factor. We continue to focus on our efforts to make facility and technology enhancements that position us for long-term efficiency and productivity gains.”

Three months into 2018, overall volumes have decreased 5.7 percent compared to 2017.

This news is a total 541 time has been read
Tags: Port of Los Angeles Sees Dip in March Cargo Volumes