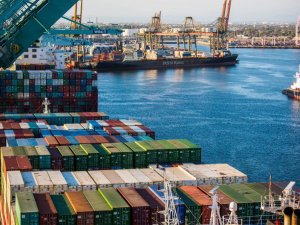 For the second consecutive month, containerized cargo flowing through the Port of Los Angeles surpassed all-time volumes for a Western Hemisphere port.

November volumes were up 23.6 percent compared to November 2015.

“We are grateful to the cargo owners who see the value in this trade corridor, and to our container terminal customers, labor and other supply chain partners who, working together, efficiently processed this extraordinary surge of holiday season cargo,” said Port of Los Angeles Executive Director Gene Seroka.

“Their ability to handle this much volume is a testament to the resiliency and competitiveness of this gateway.”

Along with a 26 percent surge in empty containers, overall November container volumes were 877,564 TEUs.

Total cargo volumes through the first 11 months of 2016 stand at 8,060,246 TEUs, an increase of 7 percent compared to the same period last year.

On the other hand, the Port of LA’s South Californian neighbor, the Port of Long Beach, continues to see a decline in box volumes attributed largely to shipping alliances changing routes and the recent bankruptcy of Hanjin Shipping.

The struggling South Korean carrier represents 12.3 percent of Long Beach’s containerized volume and holds a 54 percent stake in Total Terminals International, the operator of Pier T, one of the port’s largest terminals.

This news is a total 875 time has been read
Tags: Port of Los Angeles Stays Red Hot