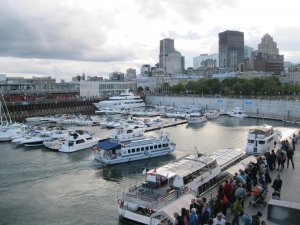 The Valencia Express, under the command of Captain Anuj Kararia, is a container ship operated by the shipping line Hapag-Lloyd, represented in Montreal by agents Robert Reford. The Valencia Express had left the Port of Lisbon in Portugal on December 22nd, 2014.

Captain Kararia will receive the Gold-Headed Cane during an official ceremony on Monday, January 5. The Port presents the trophy at the beginning of each New Year to the captain of the first ship to reach the Port of Montreal without a stopover. This ceremony will mark the 176th anniversary of this great maritime world tradition.

Operated by the Montreal Port Authority (MPA), the Port of Montreal is a major diversified transshipment centre that handles all types of goods – containerized and non-containerized cargo, liquid bulk and dry bulk. It is a leading container port served by the largest container shipping lines in the world.

The Port of Montreal has its own rail network directly dockside. It is connected to the two national rail networks and a highway system. The port operates a passenger terminal that welcomed 69,966 passengers and crew members in 2013. All other terminals are run by private stevedoring firms.

This news is a total 1669 time has been read
Tags: The Valencia Express, Captain Anuj Kararia, contanier, ship