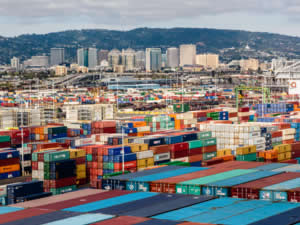 Port of Oakland containerized import volume reached an all-time high last month, according to data released today. The Port said it handled the equivalent of 87,207 20-foot import containers in June.

June import volume was up 8.7 percent over June 2017, the Port said.  It explained that two factors may have led to the increase: Peak season – the summer-fall period when most U.S. imports from Asia are shipped – is expected to be strong.

Importers may have ordered aggressively in June ahead of tariffs imposed this month by the U.S. and China.

The Port said it’s too soon to project the impact of 2018 tariff increases on cargo from China.  It said the increases would have affected about $225 million of China imports had they been in place last year.

The Port said that total container volume in Oakland is up 2.3 percent so far, this year.  That’s in line with a January Port forecast calling for 2-to-3 percent growth in 2018.

Containerized export volume is down 1.8 percent through six months of 2018, the Port said.  Exports decreased 4.7 percent in June.  The Port attributed the decrease to a strong U.S. dollar which makes American goods costlier overseas.

The Port of Oakland oversees the Oakland Seaport, Oakland International Airport, and nearly 20 miles of waterfront including Jack London Square.

This news is a total 1792 time has been read
Tags: Port of Oakland Import Cargo Volume at All-time High