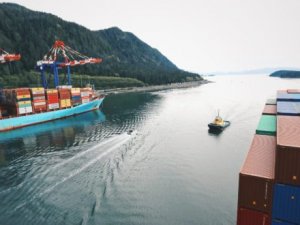 The Port’s activity is expected to grow to over 50 million tonnes of trade annually within the next decade. The continued growth of cargo volume through the Port of Prince Rupert represents an increase in Canadian trade, regional economic development and employment, and continued participation of local First Nations in the region’s gateway economy. These projects are a springboard to unlocking future private sector investment in the new facilities and operations required to meet that growing demand.

The Prince Rupert Port Authority, in partnership with CN, were the recipients of $60.6 million for the Zanardi Bridge and Causeway project. The total project cost is estimated at $122 million. It will reduce operational conflicts and increase rail capacity to the Port of Prince Rupert to accommodate future growth in import and export trade for all current and future terminals. Key components of the project include the construction of a new double track bridge across the Zanardi Rapids, rehabilitation of the existing single track Zanardi Bridge, and expansion of the causeway between the Zanardi Bridge and Ridley Island.

The Prince Rupert Port Authority has received $49.85 million towards rail infrastructure required to service the Ridley Island Export Logistics Platform project. The project’s total cost is nearly $100 million and focuses on an expansion of the existing Road, Rail and Utility Corridor to further enable unit train access. The rail infrastructure is a precursor to a large-scale bulk transload facility, a large-scale breakbulk transload facility, and an integrated off-dock container yard. The Road Rail Utility Corridor expansion will create a platform to attract private-sector investment in export transloading and warehouse capacity at the port. A full build-out of logistics capability will be able to handle a significant increase in volumes, including dry bulk, forest products and other commodities.

The Metlakatla Development Corporation, the economic development arm of the Metlakatla First Nation, was the recipient of $43.3 million toward the Metlakatla Import Logistics Park project. The $89 million project consists of a 25-hectare site development on South Kaien Island that will enable transload and warehouse operations to provide increased flexibility and value-added capabilities for import supply chains. The Import Logistics Park is a strategic complement to the Export Logistics Platform and will be fully integrated into DP World’s Fairview Container Terminal and the Port’s intermodal ecosystem to ensure unparalleled efficiency and fluidity.

“We are pleased to see over $150 million of federal investment committed to the Prince Rupert Gateway. We see it as indicative of the growing role that the Port of Prince Rupert plays in adding value to Canadian supply chains and growing Canada’s trade with the world.“These investments will enable the development of gateway infrastructure that will support ongoing growth in capacity and resiliency of the gateway.” – Shaun Stevenson, President and CEO of the Prince Rupert Port Authority

“The Port of Prince Rupert is a recognized and growing North American gateway with Asia, an important conduit for expanding and diversifying trade. CN applauds the level of investment and the commitment from the National Trade Corridors Fund to accelerate and lever CN’s own capital investments towards the Zanardi Bridge and Causeway project.”– JJ Ruest, president and chief executive officer at CN

“Today’s announcement is a significant step toward realizing our vision of a Logistics Park on Metlakatla lands to improve the efficiency of Fairview Terminal and help enhance the Prince Rupert Gateway. This project will benefit all who live in Coast Tsimshian Territory by creating new jobs related to both the construction and long-term operations of the facility. The Metlakatla Development Corporation is proud to be a part of this and other economic development projects to the benefit of the people who call this area home and to our shareholders, the members of the Metlakatla First Nation.” – Harold Leighton, CEO of the Metlakatla Development Corporation

This news is a total 136 time has been read
Tags: NATIONAL TRADE CORRIDORS FUND, PORT OF PRINCE RUPERT